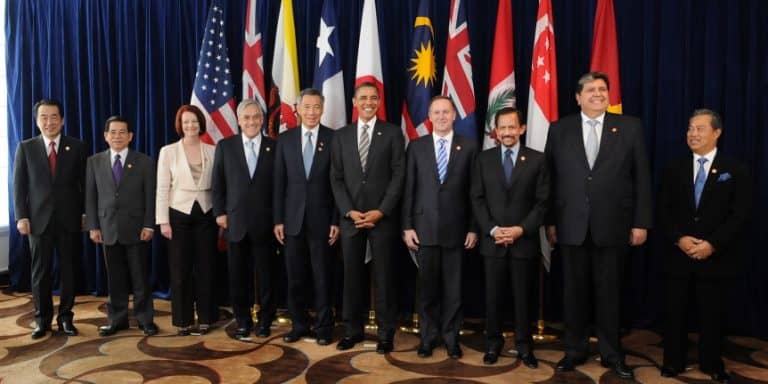 On 5 October 2015, the United States, Singapore and 10 other countries in the Pacific region concluded negotiations over the Trans-Pacific Partnership (TPP) in Atlanta, USA. In a week where individual heads of state are taking the first steps to sign and ratify the TPP in their own countries, we ask what this treaty is and what it could mean for Singapore.

What is the TPP?

The TPP is a free trade agreement between 12 Pacific Rim economies to reduce tariffs, create an investor-state dispute mechanism and establish a common framework in the law of labour, environment and intellectual property. Countries participating in the TPP include Australia, Brunei, Canada, Chile, Japan, Malaysia, Mexico, New Zealand, Peru, Singapore, the United States and Vietnam. Seen from a US perspective, this treaty is the companion agreement to the Transatlantic Trade and Investment Partnership (TTIP), a similar treaty between the United States and European countries.

The trade deal is not without its critics who complain about the secretive manner in which it was negotiated and its potential impact on labor rights, environment and corporate power.

The TPP will apply to 40% of the world’s trade, eliminating thousands of individual barriers to productivity. In particular, trade in services will be held up less frequently by customs, visas and licenses. Not all tariffs will be abolished; for example, Japan succeeded in negotiating an exception for the exportation of rice, a crucial source of revenue for the Japanese government. However, even heavily-defended national industries such as agriculture are set to have large numbers of tariffs overturned.

Singapore as a proponent of free trade

As a small city-state with minimal natural resources, and as a country that trades four times its GDP annually in goods and services, Singapore’s economy depends on the openness of global markets. More than half of the jobs in Singapore are in some way related to foreign trade.

For these reasons, Singapore is already a strong advocate of free trade, having signed 21 bilateral Free Trade Agreements (FTAs) with other nation states. The country has also negotiated 32 Economic Partnership Agreements with foreign governments that account for some 80% of its exports. The TPP countries are among Singapore’s most important trade partners, responsible for around 30% of total trade and foreign investment in the region.

What does the TPP mean for Singapore?

It is hardly surprising that Singapore is an enthusiastic signatory of the TPP. The city-state already has FTAs with 9 of the 11 TPP countries, and this most recent agreement simply extends existing treaties by improving market access and further reducing tariffs. With its location in the middle of many global trade routes, a good portion of the extra trade generated by the TPP will pass through Singapore.

The common legal frameworks established by the TPP will spread good governance across the region, creating more opportunities for Singapore-based companies to trade, invest and create new jobs. According to a study carried out in 2013 by the Peterson Institute for International Economics, the city-state could see its income rise in real terms by 1.9% by 2025 as a result of the TPP. Exports are projected to grow by 4.3% in the same time frame.

One interesting point of contention between the Singapore government and the other signatories of the TPP might be the minimum wage. In order to protect workers’ rights internationally, the TPP stipulates that all signatories are obliged to introduce minimum wage legislation in line with the requirements set out by the International Labour Organisation. At the time of writing, Singapore does not have a minimum wage. Up till now, the local government has preferred to trust businesses to treat their employees with respect – something which is in the self-interest of every employer. The TPP has yet to be ratified by national governments, so it remains to be seen whether Singapore will adhere to the agreement by introducing a minimum wage. Failure to do so could invite consequences via the TPP’s Dispute Resolution Mechanism.

We’ll continue to monitor the TPP’s progress as it undergoes ratification by national governments. For now, it seems like a good thing for Singapore and all the other signatories. Keep reading our blog for the latest developments.