The month of May has brought a pair of exceptionally good news for Singapore. On May 28, the results of the IMD World Competitiveness Rankings 2019 were released and Singapore topped the list; the last time it achieved this accolade was in 2010. Later the same day, the annual Global Childhood Report was released and Singapore beat Sweden, Finland, and Norway to top the list of 176 countries as the “best country for children to grow in”.

Singapore is universally considered to be one of the best countries for starting a business. For instance, last month, INSEAD (France’s leading business school) ranked Singapore 2nd on its Global Talent Competitiveness Index, which measures a country's ability to compete for and attract global talent. On the IMD ranking, Singapore has been placed in the top three positions for each of the last ten years. But this is the first time in nearly a decade when it reached the very top position. It displaced US, which fell to the 3rd position - behind Hong Kong in number 2 position.

These rankings are determined by Switzerland’s IMD Business School. IMD has conducted this survey since 1989 and it releases the rankings annually. IMD evaluates 63 prominent countries on 235 criteria that fall in four broad categories:

Singapore's improved ranking this year was attributed to its advanced infrastructure, the high quality and availability of its skilled labor, favorable immigration laws, and efficient procedures for setting up new businesses in the country. As one of Asia's leading business and financial centers, the country consistently ranks highly in other similar global rankings.

"In a year of high uncertainty in global markets...the quality of institutions seems to be the unifying element for increasing prosperity," said Arturo Bris, director of the IMD World Competitiveness Center. Looking ahead, IMD advised Singapore to strengthen the ability of its companies to scale up through deeper local and international partnerships.

Overall, Asia-Pacific economies showed good improvement with 11 of 14 countries either climbing up in the rankings or holding steady. India was ranked 43 and improved its position by one place from last year.

The "Best Country for Children"

On the same day, UK Based “Save The Children” organization released its 2019 report on the status of children across the globe and it revealed its ranking of the best countries to raise children. Singapore topped that list. It beat Sweden, Finland, Norway, Slovenia, Germany, and Ireland, after scoring an impressive 989 out of 1,000 in the End of Childhood Index. The best and worst countries on the report were as follows. 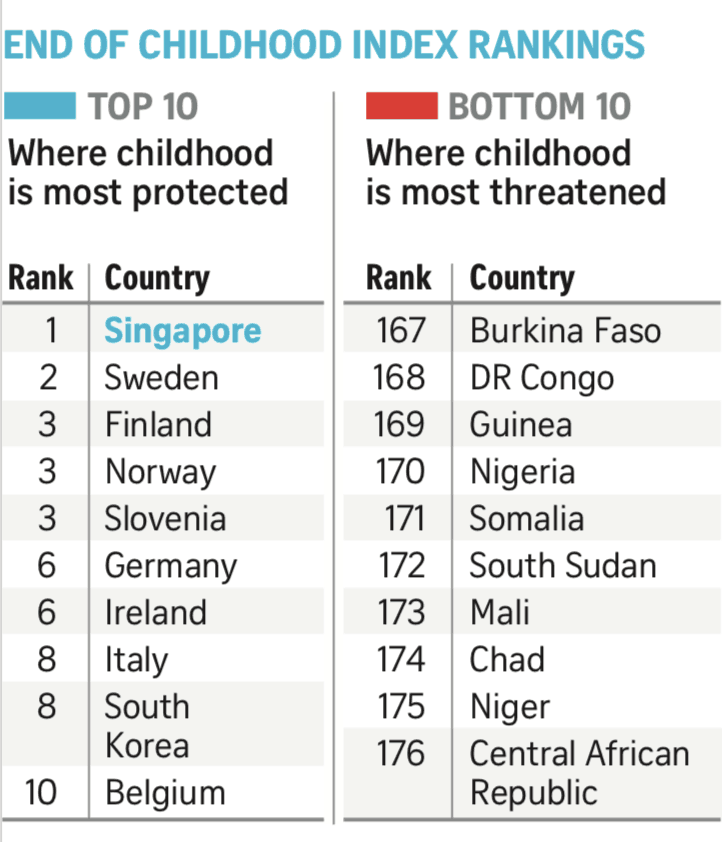 The rankings are based on a country’s performance on a number of childhood related metrics. The report shows an alarming disparity in the quality of life experienced by children across the world. A juxtaposition of Singapore’s performance on some of the key metrics against that of the bottom-ranked country - Central African Republic - highlights this sad reality. 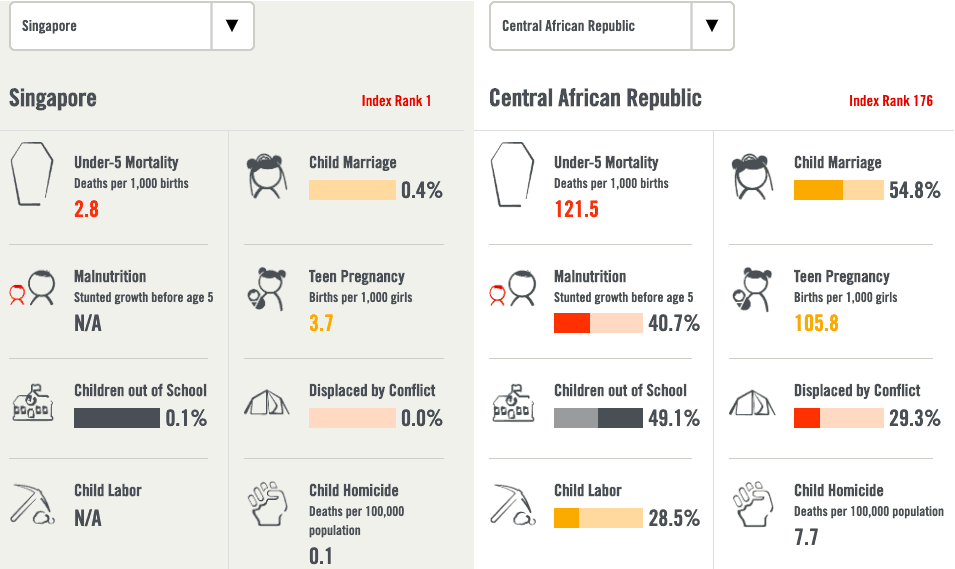