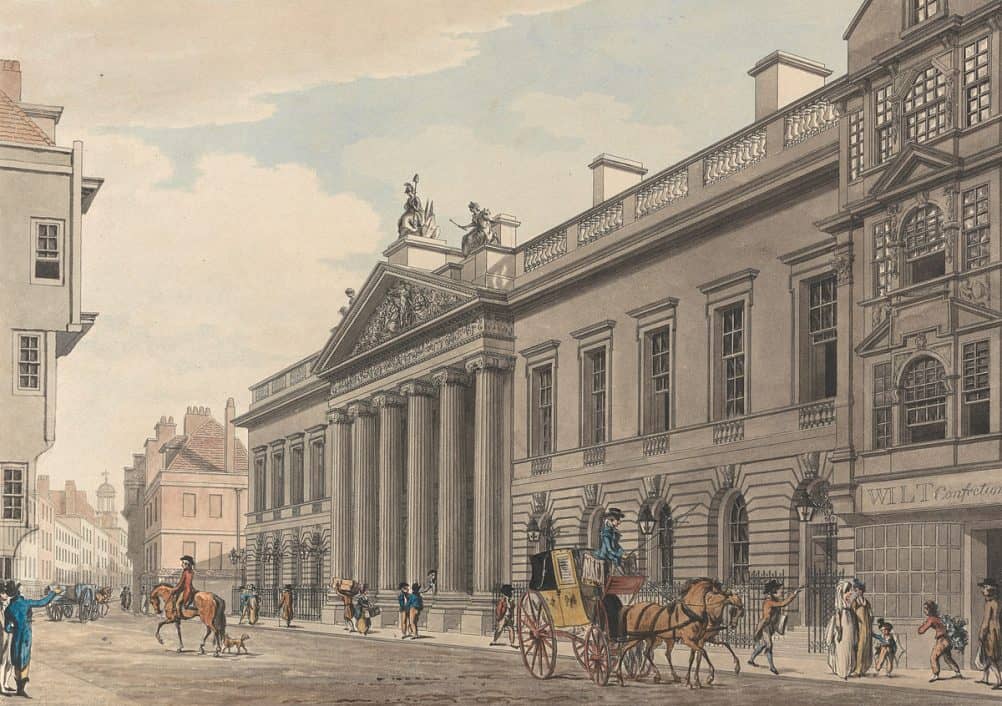 The formal agreement that led to the establishment of a British trading colony in Singapore was signed 200 years ago on 6 February 1819 between the British East India Company and Sultan Tengku Hussein. Arguably, present-day Singapore can trace its birth to that singular event. In honor of that event, here we review the seminal role that the East India Company played in the creation of the modern Corporation.

The modern joint-stock limited liability corporation is a relatively recent invention, coming into its current form about 400 years ago when the East India Company was formed. But the concepts that underlie a corporation have a much older pedigree. The modern corporation has three salient characteristics:

Of these, it is the first that is the most important; the concept of limited liability is a corollary of the fact that a corporation is an "independent person" - therefore, its debts die with it. As with most western civilization concepts, the idea of a separate legal personality for a corporation was invented by the Romans.

The word corporation comes from the Latin word "corporare" which means "to combine in one body". The Romans were the first to codify the notion of an organization as having an identity that was distinct from that of the persons who owned it or belonged to it. The first such organizations were called publicani who purchased from the Roman state the right to collect tax revenues. The Roman Republic also used private contractors to build the state's infrastructure including its aqueducts, temples, and roads. These contracts were awarded to publicani organizations. A publicani was typically a group of artisans who would pool their resources to bid on a contract for a specific trade or business. Gradually, the publicani evolved into large organizations that employed thousands of workers, had many investors, hired professional managers and likely received from the state a grant of limited liability for their investors. In a foreshadowing of the modern MNC, the publicani amassed enormous power within the Roman state, often bribing officials and manipulating state affairs in order to advance their economic interests. In ancient Rome, corporations were also used for religious or community organizations.

Roman law did not end with the fall of the Roman Empire; rather it transmuted into aspects of Christian canon law. The concept of a corporation also survived, and many organizations such as monasteries, cities and universities were structured as corporations through charters from the relevant sovereign or religious authority. In medieval Europe, churches and local government were established as corporations; for instance, the City of London Corporation and the Papal Office.

In medieval Europe, businesses also used the corporation structure to pool their resources and to align their interests. Guilds, organized as corporations, were used to create a monopoly in a specific trade or craft.  Guilds received their charter from a sovereign who used his power to ensure that no competition to the guild existed. In exchange, the guild paid regular fees to its chartering authority. Similar structures were also prevalent contemporaneously in the east - the oldest continuously surviving business, Kongo Gumi, was founded in 584 AD to construct temples in Japan. Similar, business entities called sreni also enjoyed special rights in India from 800 BCE to about 1000 AD.  Indian Mauryan empire.

During the Middle Ages, there were no private commercial organizations that resembled the publicani. That changed around 1600, when a new form of organization emerged in Britain and Holland to challenge the trading might of Spain and Portugal. The upstarts were chartered corporations and their origins lay in geographic trading guilds. These guilds were used to organize trade to and from specific geographic areas. Such trade guilds were called regulated companies in England. Through their charter, they received a monopoly to trade in a particular geography (their names reflected their geography; such as, the India Company, Russian Company, African Company, etc.) Around 1600, these companies began using equity subscription to raise capital for specific voyages. The investors enjoyed limited liability because the voyages were undertaken by the company. These regulated companies were called joint-stock companies, and they were incorporated under a charter from the state.

The British East India Company (EIC) was the quintessential example of this structure and its history had an important impact on the evolution of the modern corporation. EIC was founded by a charter from Queen Elizabeth I on 31 December 1600. It had 218 original subscribers who invested in the enterprise. EIC was granted a monopoly on all English trade in any lands lying east from the Cape of Good Hope to the Straits of Magellan; thus, its area include the whole of Asia and the Pacific. Over time, the EIC and the British government became increasingly intertwined as the EIC was dependent on the British Naval force for control of its trade routes. This relationship proved extremely lucrative, with EIC accounting for half of all world trade and its shareholders receiving returns of 150% on their investments in late sixteenth century.

EIC eventually became too large and complex and it was eventually taken over by the British government through its Government of India Act of 1858 and the company was formally dissolved through the East India Stock Dividend Redemption Act of 1873.

In the case of companies such as the EIC, an authority would charter the corporation that it deemed worthy and grant it a geographic or business monopoly. The arrangement of granting monopoly charters worked well for large projects such as building of highways, canals and railroads where significant capital was required and large economies of scale existed. But for other types of projects and businesses, the state’s monopoly on bestowing corporate status became a bottleneck. If an entrepreneur tried to form a new corporation, its incumbent competitors would thwart the petition by invoking their rights under their existing charters. This limited the growth of new businesses even when such businesses were urgently desired to support the ensuing growth of the economy.

Entrepreneurs tried to circumvent these limitations by purchasing a failing corporation and using its charter to conduct business in an industry unrelated to the original charter. Since the supply of such failing corporation was quite limited, entrepreneurs also issued stock in new unincorporated companies. These actions lead to contentious legal situations and lead to the enactment of anti-competitive acts such as the British Bubble Act, which forbade corporations not authorized by a royal charter. By the 1800, the situation in Britain had reached a crisis point - the industrial revolution had created enormous demand for entrepreneurship, yet the state was acting as a bottleneck through its monopoly on the grant of corporate status. At the same time, mercantilist economic theory was gradually being abandoned in favor of a laissez-faire and classical economic liberalism. There was a corresponding desire to transform corporations from government-affiliated bodies to private and public entities which were free of government control.

The solution was found in a new concept - incorporation by registration. Legislation was passed that enabled a person to incorporate a firm simply by filing paperwork. The laws introduced by the Limited Liability Act of 1855 allowed investors to limit their liability in case of failure of the business with the result that the Industrial Revolution saw the establishment of many limited liability entities. No longer was incorporation a privilege that was granted by the state to a few; it was an option available to all. The modern corporation had arrived.

The laws governing the modern corporation in most countries trace their history to the British legal system. The Joint Stock Companies Act 1844 established the basic template for laws governing the modern corporation. A decade later, the Limited Liability Act 1855 further codified the notion of limited liability by capping an investor's risked amount to the capital that the investor had invested. Finally, these two acts were consolidated under the Joint Stock Companies Act 1856, and this Act is now regarded as the foundational law for modern corporation. The last major development in the history of company law was the decision of the House of Lords in Salomon v. Salomon & Co. This decision confirmed that a) the company has a separate legal personality from its owners and b) its liabilities were separate and distinct from those of its owners.

Modern corporate law governs organizations that are registered or incorporated under the corporate law of a sub-national or sovereign state. Such organizations are created by shareholders who invest and provide the initial capital. The company is controlled by the shareholders through a board of directors who in turn delegate day-to-day control to executives. A modern corporation shares the following characteristics:

The Corporation has been an enduring invention. We owe its original concept to the Romans. It was subsequently refined by British trading merchants, who modified this structure in order to raise capital to fund individual ships or voyages. Initially, incorporation could be performed only with royal patronage but subsequently with a simple act of registration of papers. What resulted was a publicly traded joint-stock corporation - an entity with rights similar to those of an individual, with limited liability, and shared capital contribution. The corporation has served humanity extremely well; it has enabled enormous engineering marvels, improved life spans, made global travel available to many, created amazing electronic marvels, all while creating enormous wealth in the world.